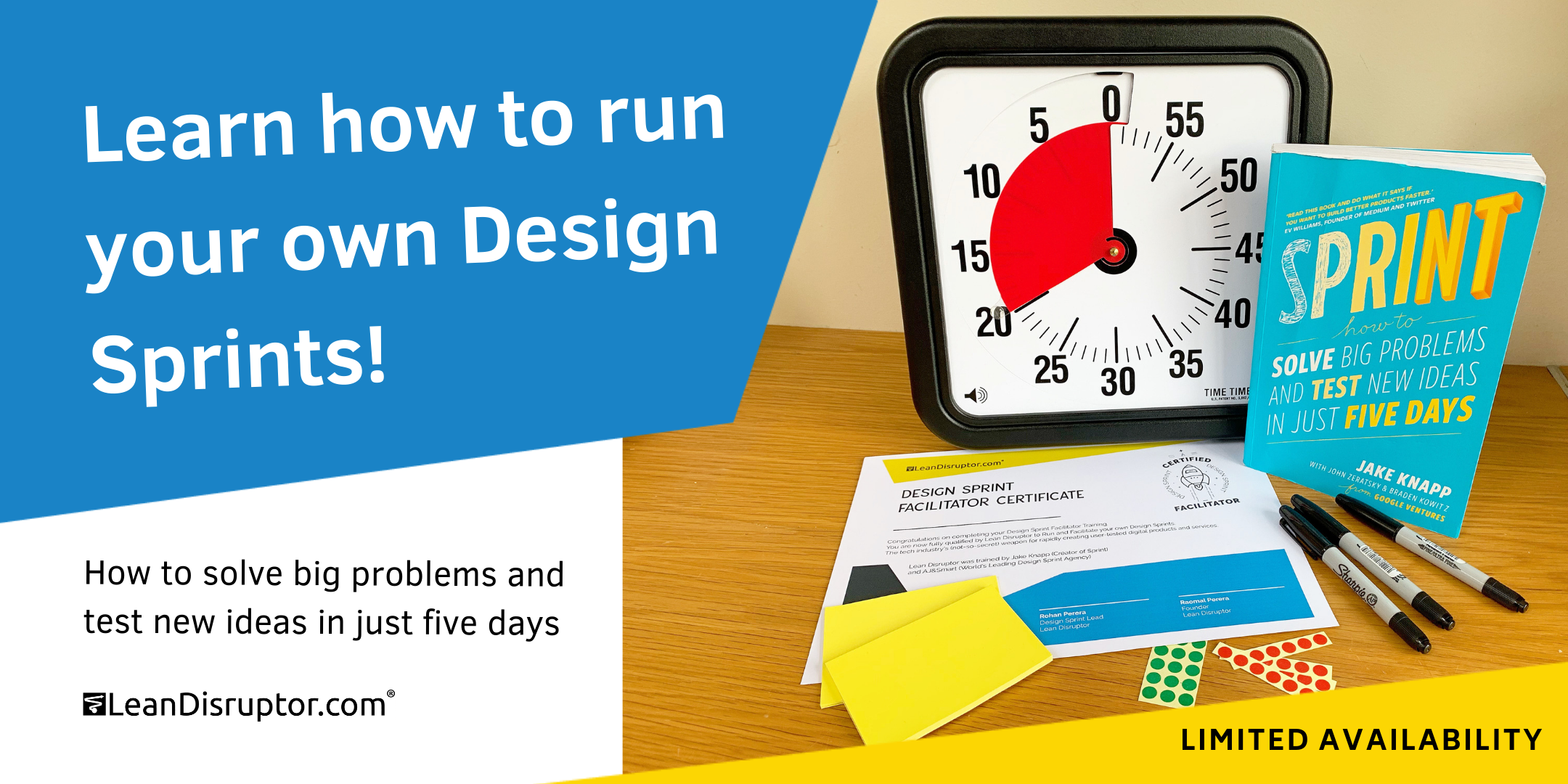 Learn how to run your own Design Sprints!

Be guided through a hands-on, simulated experience of a Design Sprint, in almost real-time. Master the exercises by actually doing them.

We have trained participants from:

Product Managers and Product Designers face big questions every day. Now there’s a surefire way to answer these important questions; the SPRINT. Jake Knapp created the five-day process at Google, where sprints were used on everything from Google Search to Google X.

Think of Design Sprints as a ‘recipe’ where Design Thinking is the cookbook. Developed at GV, it’s a “greatest hits” of innovation, behavioural science, design thinking, and more—packaged into a battle-tested process that any team can use. This is a Game Changer for your company. Learn how to facilitate an internal Design Sprint.

“The Design Sprint workshop with Rohan and Raomal was really excellent. The hands-on approach to learning and obvious passion for the subject shine through the whole day. I look forward to applying my this new technique and running our first sprint in MoneyMate” – Ronan Brennan, CTO, MoneyMate

“The Design Sprint workshop provided us with a solid framework for creating, curating and realising ideas. Together we cut through the complexity and generate workable solutions which can quickly make their way into our customer’s hands. I would highly recommend this” – Mark Foley, UI/UX Design Lead, Poppulo

You may have noticed Facebook’s updated Newsfeed. This was a direct result of a Sprint. Design Sprints are used for updating existing products as well as creating and testing new ones. Here’s a medium post from one of their lead designers: https://medium.com/facebook-design/evolving-the-facebook-news-feed-to-serve-you-better-f844a5cb903d

Blue Bottle Coffee is valued at $700 million due to Néstle acquiring a majority stake in them. Before they ran a Sprint they were not selling outside of the U.S. They ideated and tested their new website using this process with Jake Knapp. https://techcrunch.com/2017/09/14/nestle-acquires-a-majority-stake-in-blue-bottle-coffee/

Facebook, Slack, Savioke, Bluebottle Coffee, Lego have all run very successful Sprints using the Jake Knapp’s Sprint process. In this workshop, you will be taking part in a Sprint. We are condensing the 5 days into one day! We will bring you through every step of the process along with teaching you how to facilitate your own internal Sprints.

About Rohan Perera:
Rohan Perera is an advocate of Jake Knapp’s (Author of SPRINT, How to SOLVE Big Problem and TEST New Ideas in Just FIVE Days) SPRINT process. Rohan attended Jake’s first two workshops in Bologna and Berlin. Soon after that, he was a guest designer at an AJ & Smart Design Sprint (Berlin). Rohan has facilitated Design Sprints for corporates in the US, UK & Ireland and has trained over 200 facilitators on the process in Ireland, Sri Lanka & Singapore. In the last 5 months alone he has facilitated 13 Design Sprints across 3 countries. He is an evangelist of this game-changing methodology.

Raomal co-founded two technology companies; ISOCOR was listed on NASDAQ in 1996 and subsequently acquired by Critical Path in 1999. Network365 acquired US company iPin and formed Valista in 2003. Valista was acquired by Aepona in 2009 and Aepona was acquired by Intel in 2013.